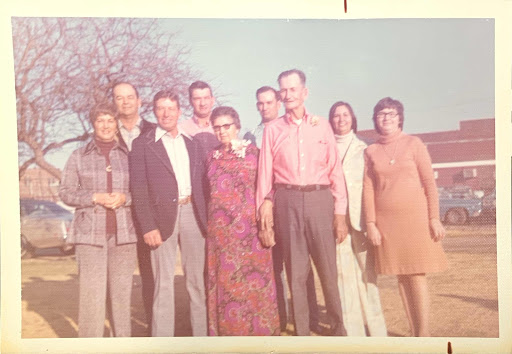 Ezra and Dorothy Hartness had seven children, 4 boys and 3 girls which they raised in a small brick house just outside of Pawhuska, Oklahoma that was built in the 1920’s.  Dorothy was a proud member of the Seneca-Cayuga member. Each of the seven children grew up very tight-knit as a family, and only 2 years apart in age.  Ezra started his career as a truck driver before making his way in the oil and gas industry as a pipeliner, working primarily as an operator of equipment. Little did Ezra know that his decision to join pipelining would set the path for a family legacy of seven children all following his lead. Two of his three daughters would also go on to marry men who also worked in the oil patch. The Hartness men, educated about pipelining from an early age, could easily operate, repair and build any kind of machinery. This was a talent they inherited from their father who was so mechanically talented, he built his own car from miscellaneous parts.

Barbara – Married to a Pipeliner

Hazel- Married to a Construction Engineer

Don Hartness was the oldest of the siblings, born in 1926. Second born was Buddy Hartness, followed by Barbara, Buddy would go on to work in the oil patch as a pipeliner and Barbara would marry pipeliner. Dossie and Hazel would follow as the fourth and fifth additions to the family. Dossie married a pipeliner and Hazel would become the holdout who married a Construction Engineer who led highway development. Owen and Timmy would be the final additions to the group of siblings and would eventually work alongside one another as pipeliners.

When reflecting on the impact of growing up as part of 7 hard-working siblings, the Hartness family shared: “There is hardly a pipeline job in the United States that our family did not have some part in making happen. Our family is proud that our descendants have worked to have a trusted name within the industry.”

The Hartness family set a high bar with their success in oil and gas. Not only did they work hard on behalf of their own families, they were champions of employment for women and people of Native American tribes.

In 1990, a book was released titled “Men of Achievement within the Pipeline Industry.” Within it, fifty Hall of Fame achievers were recognized from various industry sectors. Among the likes of L.E. and Frank Phillips, founders of Phillips 66 Petroleum, was a feature of the eldest sibling, Don Hartness. Being recognized this way was meaningful. It was a nod to the enginuity, hard-work and sacrifice required to succeed in one of the world’s toughest industries.

Even though the oil and gas industry places great demand on worker’s time, the Hartness men always made their children and grandchildren a priority. While the family shared stories of their husbands and fathers being away on the pipelines, sometimes up to 300 days a year, they called out the meaning of every day their spouses and fathers were home. The Hartness women shared that having spouses who worked in the oil fields required a spirit of teamwork, as the women would operate like ‘single-parents’, supporting the children while their husbands were away for extended periods of time. When the men were home from the pipeline, though, the focus was always on spending quality time together.

Rod Hartness, the son of the second Hartness sibling, Buddy, expanded: “My dad felt like if he didn’t work, others couldn’t work. He wanted to employ the whole community. He missed a few ball games and ropings, but I never felt bad because he always provided for us. He would always joke that if he didn’t teach his kids to work, he’d have to feed them himself!”

The children of the Hartness family shared that whatever time their fathers’ were not at home, they were still connected and never doubted their parents’ love for them.

Tonya Hart, the daughter of the 6th Hartness sibling shared: “Because the nature of pipelining is so sporadic, the schedules are often unpredictable, but no matter what we had going on, if my dad was home from the pipeline fields, we were at home, spending time with him.”

When asked what the Hartness siblings valued collectively as a family, Leston Morrison, the daughter of the 4th Hartness sibling shared: “Every Sunday and Wednesday when our fathers’ called from the pipelines to talk, we had to be home to talk with dad.” Family was utmost of importance. The siblings not only enjoyed their families at home, but also while away. Oftentimes, the brothers would schedule their work to different pipeline assignments together, so they could be together as a family while they were away.

Charla Hartness, daughter of the 7th Hartness sibling shared: “We were taught to work hard, and do your best, and put your family first always!”

Cherry Byfield, the daughter of the 3rd Hartness sibling shared: “We were always taught that, if it is going to be done, it needed to be done right! We were never to put ourselves in a situation where someone else could look down on us for how we work!”

Rod Hartness continued; “The whole family worked with my dad on different jobs. He was a true pioneer of the pipelining industry and ended up employing many of our family members. He always taught us that trust in his family is important, and if you were referred to by my family, the pipeliners trusted you were capable.”

Today, 6 of the siblings are survived by the youngest, Tim Hartness. The family, however, continues to grow and prosper. The Hartness family now boasts of 22 grandchildren, 16 girls and 7 boys. The children and grandchildren continue on, carrying with them the values and legacy of this Oklahoma family. The industries represented by family are now more diverse, but their approach remains the same. Working hard to better themselves and their communities is fundamental. The Hartness works in fields of education, administration, psychology, energy, rodeo, audiology, health care, and the oil and gas industry.

The Seneca-Cayuga Nation Education Program provided meaningful support to the Hartness family members that have completed college, graduate or doctoral programs. This financial aid is available to all tribal members and provides necessary support to our tribal college students.

When asking the Hartness family what makes for a strong family, Tim shared, “My parents and siblings were people of great character. They were taught to take responsibility for their actions and to pursue success in faith, family and career. They showed up for each of us, and made their family members a priority regardless of what they did for work. Our success was not just individual, it was helping one another accomplish our own goals, as a family and we were raised to be proud of our Seneca-Cayuga heritage.”

Tonya Hart, added: “Mom would always take us to Green Corn. It was important, especially when we were young, to connect with other members of our family and learn what it means to be a tribal member.”

When asked what being Seneca- Cayuga meant to the Hartness family they shared:

“Being Native American is a huge part of our heritage. We grew up where your indian heritage was who you were. Whether we attended the Green Corn Ceremonies or aimed to represent the Nation well in our chosen careers, we carried our heritage with pride.”

Rod Hartness, shared: “I put my Seneca-Cayuga name on every union letter. I am very proud of it. I am also a 3rd generation pipeliner. My advice to my employees is get out there and do your work and keep your mouth shut! We have a desire to train our tribal employees how to work hard and not compare yourself to others’ around you. We taught them to push past any pre-conceived ideas others’ may have had for us, and train harder than anyone else. My dad always told me, work for what you are worth, don’t compare. Keep your head down, it will pay off!”

To this day, the Hartness descendants all speak highly of their family, of one another and of their tribal heritage. They shared: “We know what we have in our family–is special.”
They are proud of their legacy and the impact it’s had on those around them.

How does the Seneca-Cayuga Nation use Grants?

An Update From Grand Lake Casino

A Letter from Charlie Charlie Diebold