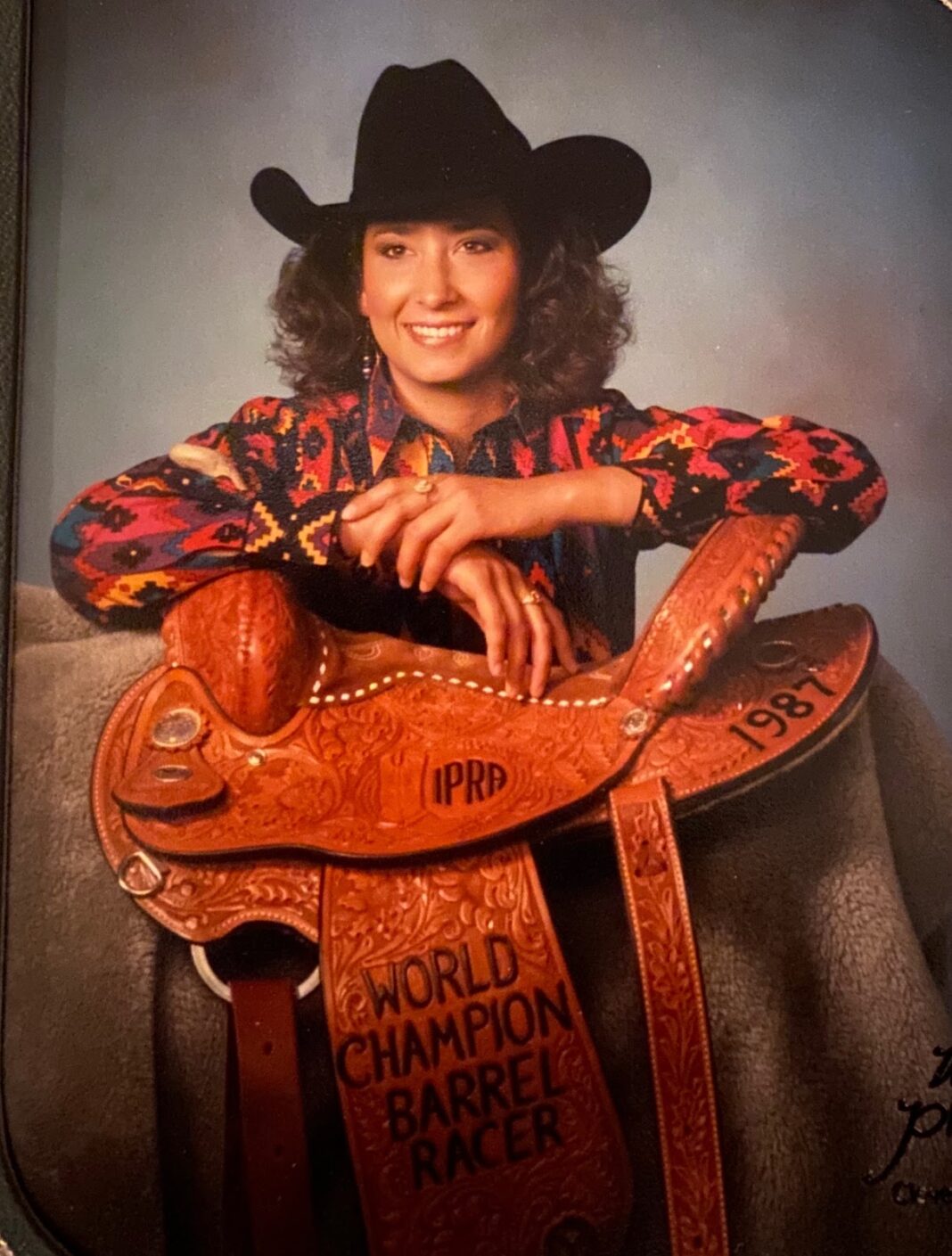 Charla Hartness Allen is a world championship barrel racer and proud member of the Seneca-Cayuga Nation. Her tribal heritage extends from her father, Tim Hartness. Charla grew up on the plains of Pawhuska, Oklahoma and began riding horses when she was just 5 years old.

At the age of 18, Charla won the Texas Barrel Racing Futurity on a horse that she had raised and trained. This particular competition was designed for horses who had not yet competed in a race. It turned out to be the first of many wins for both the horse and rider. As a new champion and with winnings that exceeded more than $10,000, she charted her course to travel the country with her brother and compete at rodeo events.

In 1990, Charla would repeat as World Champion, winning on the same horse she had in 1987. Following the 1990 World Championship, Charla married Gip Allen, a Texas cowboy who shared her family’s love for all things rodeo. Charla and Gip would travel the road together on the rodeo circuit and continued their winning ways. In 1993, Charla took second place at the Old Fort Days Futurity, a win worth more than $37,000 and another keystone achievement in her career. Charla was a professional barrel racer for approximately 8 years, and accumulated a case full of awards and championships during that time.

For her contributions to sport, Charla was recognized as a leader in women’s athletics by the New York City Women’s Sports Foundation. She was recognized alongside other world-class female athletes, including female members of our United States Olympic Team.

When asked about the type of commitment required to compete and succeed at the highest level in the world, Allen shared “My job was to train and condition horses for world-class competitions. Becoming a world champion requires endless hours of training, travelling thousands of miles between races and always making certain your horse is physically prepared to compete.”

Gip and Charla, have two daughters, Sage and Blake. Both of their children have been named in the Seneca-Cayuga language.

When asked who the greatest influence in her life has been, Charla shared “By far, it was my parents. I was very fortunate to always have family support in what I do. Until my mother became ill, I never went anywhere alone to a barrel racing event, or rodeo. I never went alone. They were always involved in our sports and anything else we did. My father was a pipeliner and still prioritized us as best as he could. Whatever we needed from my parents during our lives, they always tried to do for us.”

When asked what secret she had with juggling her championship rodeo career and being a mom, she shared: “Once I became a mother, I slowed my career down. Both of my children participated in junior rodeo. My oldest participated at the high school and collegiate level. My youngest has always loved basketball, and it has been a big part of her life. When my youngest was in elementary school, she wanted to do cheerleading and I slowed down my rodeo involvement quite a bit to make myself available to my children. Even though my girls are now much more independent and busy. I still feel obligated to keep my schedule available to them, in case they have an event happening or if there is a situation where I can provide support. I want to be at their events and be a part of this season in their lives.”

Charla has raised two young women who have taken after their mom’s determination: “ My girls know what they want and they go after it.” When asked what life advice she is in regards to pursuing goals Allen shared: “ Always be determined and don’t give up. Dedicate yourself to what you are passionate about, always strive to be better, never give up on your dreams.”

With her children now older, Allen is beginning to get back in the saddle again, revisiting her first passion and dreaming of rodeo racing. We are excited to see the stories from her next chapter of life.